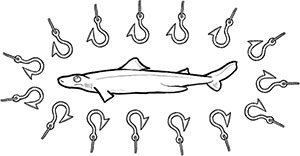 Before the DSL fishery even began in South Africa there was NEVER any Environmental Impact Assessment (EIA) done to see what the effects of the industrial scale removal of predators would have on our marine ecosystem. Now that the data is showing the impact, according to the National Plan Of Action-Sharks, DEFF has to apply a precautionary approach, which they are not doing.

Since the inception of the DSL fishery in South Africa, there have never been any restrictions. Currently permit holders fish under the following conditions:

In a nutshell the DSL fishery can catch as much as it wants and pretty much wherever and whenever it wants without so much as an observer recording what is even going on.

In the most recent South African stock assessment report for the commercial smoothhound fishery of 2019, the high impact these few vessels are having can be clearly seen:

From this there can be no argument of the highly damaging effects just one vessel can have on the species.

When you factor in how localized and concentrated this fishing effort is, it becomes that much more damaging to this coastal ecosystem.

In 2011, 2015, 2017 DEFF scientists recommended slot limits to protect both young and mature breeding stock. None were ever implemented.

Furthermore it is listed no less than 5 times in South Arica’s National Plan of Action for Sharks, part of a global effort of which SA is a signatory, that a precautionary approach needs to be adopted in the following cases where there is a cause for concern:

The DSL fishery ticks every single one of these black boxes and yet regulations have not been put in place and the DSL fishery continues with business as usual.