In 2019 members of the public took the matter into their own hands and collected photographic evidence of the vessel in question fishing in the middle of the 45km long De Hoop reserve, catching and killing sharks, many of which were protected species.

Despite this irrefutable and overwhelming evidence the vessel is still fishing to this day.

When not directly inside the MPAs these vessels operate directly on the MPA boundaries, fishing these edges for days on end waiting for the sharks as they move in and out of the reserves, in effect undoing any good that the reserves had done to that point.

According to a 2011 study the importance of boundary areas to MPAs are highlighted:

“Although sharks used large areas inside MPAs, most individuals tended to use only half of the available protected space. In addition, all sharks made excursions from MPAs and individuals exited and re-entered at consistent locations along the MPA boundaries”.

In terrestrial terms it could be likened to the following. Imagine the Kruger National Parks fences were down and it was legal for an industrial scale hunter to set thousands of gin traps and snares to catch every lion, leopard, cheetah, wild dog, leopard and hyena that unknowingly set foot outside the park.

This is exactly what is happening in South Africa’s oceans as we speak and the vessel monitoring data irrefutably attests to it. 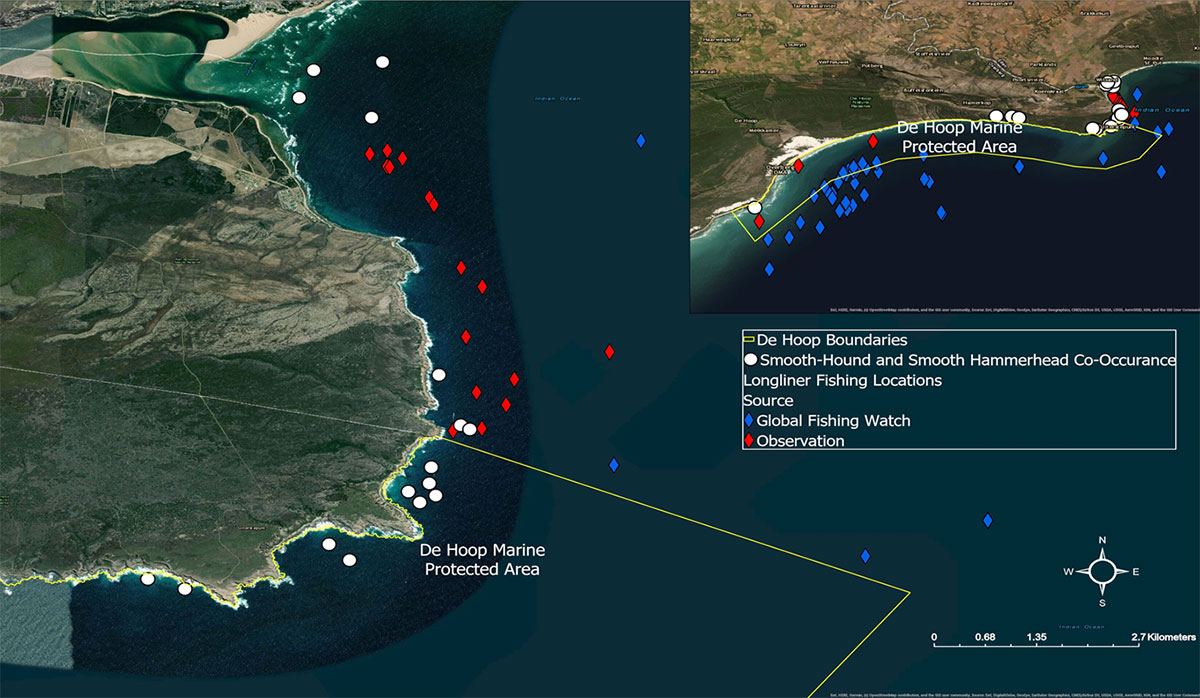 The above Image shows Demersal shark longliners targeting MPA’s both legally and illegally and also overlap of their efforts with protected hammerheads.

Every Blue dot signals vessel monitoring data and every red dot signals public observation data when the vessel may or may not have had their VMS switched on. This is just for one of the DSL’s primary fishing hot spots adjacent to South Africa’s primary marine protected area, The De Hoop Marine Reserve.

These vessels target many other MPA’s such as Goukamma and Robberg where the same activity patterns can be seen.

In virtually any protected area environment there is a buffer zone, and almost certainly one to stop industrial or commercial exploitation effort, yet here there is none.