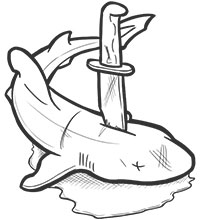 Ethics, health and hygiene officials clearly are not aware or turn a blind eye as to how these sharks are caught, killed and stored before ending up in Fish and Chips in Australia.

Smoothhound sharks (called Gummy sharks in Australia), like these pictured below, have been tested in South Africa to contain up to 14 times the acceptable safety levels for heavy metals which can lead to significantly greater chances of getting neurological diseases such as dementia.

Even though the study was localized in a lagoon, the data should cast enough doubt on the risk to at least test the exporting or importing meat.

Covid-19 has so well illustrated that the consumption of exotic wildlife can lead to serious health issues.

Sharks being hauled up alive by the dozen are left to struggle on the decks of boats until it is their turn to have their heads cut off whilst still alive.

The highly unhygienic storage and processing of these sharks poses significant health risks, often unaware to the end consumer in Australia. Below is a catch of Smoothhound shark destined for the Australian Fish and Chips market.

Shark carcasses floating in their own blood in the African summer sun are what await the end consumer in Australia.

Sharks stored after being fished and gutted.