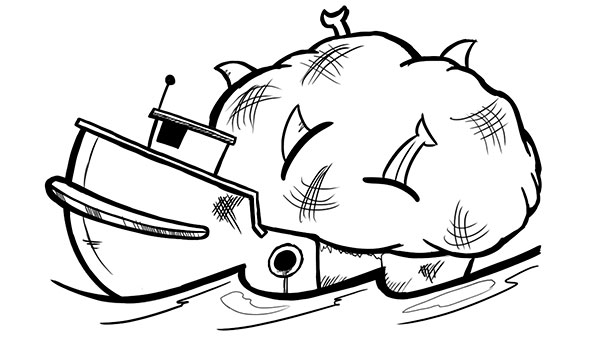 * All information below has been gathered from Smoothhound and Soupfin shark stock assessment data supplied by DEFF in 2019.

The Demersal Shark Longline (DSL) fishery fishes by means of using longlines. This means hundreds of baited hooks are set on longlines that are spread over an area and are left to “soak” on the bottom of the sea floor. The target species are Smoothhound and Soupfin sharks and the fishing takes place along the inshore coastal areas of the eastern South African coastline.

According to the Department of Environment, Forestry and Fisheries (DEFF), the Smoothhound shark is one of the top 5 most valuable shark species in South Africa.

The Soupfin shark is also according to DEFF, one of the top 5 most valuable shark species in South Africa and the DSL makes up 20% of total contributed fishing effort for this species. The shoaling behaviour of this species makes it susceptible to high fishing mortality.

Despite the documented value of both these shark species, no Environmental Impact Assessment (EIA) has ever been done on the DSL fishery, there are no restrictions on the fishery and there have never been any observers on any DSL vessels. This is despite the fact that on the DSL permit document it states “a dedicated observer programme is essential for the DSL Fishery”.

According to a 2019 DEFF scientific assessment of the Smoothhound and Soupfin sharks, both species are in a state of collapse. Since 2011 scientist within DEFF have been making recommendations to be implemented in order to keep this fishery sustainable. To date their management have ignored all these recommendations.

In South Africa, historically there had been 6 Demersal Shark Longline permits issued and the owners had initially only fished these permits to supplement their other catches in hard times.

Since 2015, three permit holders began to intensely fish this resource as they had found a new market – Australia. This was to meet the Australian demand for Gummy shark (called Smoothhound in South Africa) used in their Fish and Chips. These same 3 vessels have perfected how, when and where to target the Smoothhound and Soupfin sharks.

Although a permit is required to operate, the DSL fishery in South Africa has been allowed to operate as follows:

So why is this fishery so damaging?

The National Plan of Action for Sharks (NPOA-Sharks) of which South Africa is a signatory, states that that a precautionary approach needs to be adopted in the following cases where there is a cause for concern:

The problem here is clear. The DSL fishery is not being managed sustainably and this is having a catastrophic effect on Smoothhound and Soupfin sharks, as well as the entire inshore coastal ecosystem. It will therefore have an impact on the medium- and long-term sustainability of this same fishery but also other fisheries.

There are just three vessels that are intensively fishing their DSL permits. If this fishery was to be closed, they could easily be absorbed into other unsubscribed fisheries such as Tuna and Swordfish.

In 2013-2014 two of the three DSL vessels were not able to fish due to having contravened permit regulations. During this time, the catch of Smoothhound sharks was greatly reduced, dropping by nearly 200 tons in that period. This is yet another example of how focused and damaging this fishery is. But, it also shows that this problem can be fixed IF measures are taken.